Harleston played the powerful role of an “outsider inside”, a leader within an institution who consistently voiced alternative viewpoints and sought out pathways for justice-based institutional transformation. Harleston left Tufts in 1981 to become the President of the City University of New York. The openings he created at Tufts remained, and a diverse legacy continued to unfold that affects the university to this today.

When I first came to Tufts, it was remarkably homogeneous. ... [I]t was, ethnically, terribly homogeneous. ... [W]hen I came to Tufts, I was interviewed by the chair of the department, the dean of the College, the provost, and the chairman of the Board of Trustees. ... [S]o help me God, I was the most-interviewed faculty member in the history of Tufts, I think. And that’s because they didn’t know Black faculty ... in 1956.

Bernard Harleston, visionary and community builder across generations, created openings at Tufts upon which so many other faculty and staff would make their marks. Born in New York City in 1930 to parents from Charleston, South Carolina, Harleston—along with several of his nine siblings—was a member of the first generation of his family to attend college, and they all went to historically black colleges and universities (HBCUs): Howard, Tuskegee, and Fisk. Harleston attended Howard University, in Washington, D.C., before completing his PhD in psychology at the University of Rochester, in New York, in 1956. He joined the Tufts psychology department that same year, becoming the first Black faculty member in a tenure-track position in the School of Arts and Sciences. Over the ensuing decade, Harleston distinguished himself in his research, teaching, and collaborations with many faculty members across the university.

In 1968, Harleston left Tufts to become the provost of Lincoln University, a public HBCU in Oxford, Pennsylvania, but he returned to Tufts in 1970 to serve as dean of the School of Arts and Sciences. In the context of the rising Black Power movement, as well as COINTELPRO—a series of covert projects by federal agencies to infiltrate and undermine Black social justice organizing—Harleston played the powerful role of what historian Barbara Ransby calls an “outsider inside,” a leader within an institution who consistently voices alternative viewpoints and seeks pathways for justice-based institutional transformation. Harleston organized the first cluster hire of faculty of color at Tufts, bringing Gerald Gill (history), Marilyn Glater (political science), Bobbie Knable (English), Daniel Brown (languages and literature), and Pearl Robinson (political science) to the university. This younger generation of Black faculty and staff leaders had a transformative influence on the school for decades to come. “I feel I was doing my job,” Harleston says. “We expanded the pool and reached further into the pool to look for candidates.”

Harleston resigned as Dean in 1980 and left Tufts in 1981 to become the president of the City University of New York. The openings he created at Tufts remained, and a diverse legacy continued to unfold that affects the university to this day. 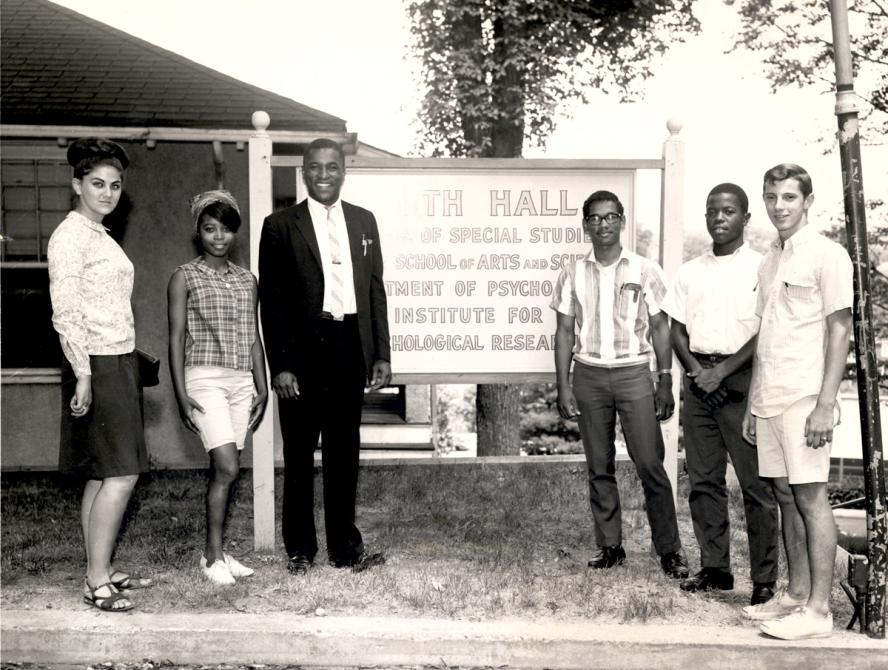 Dean Harleston with students from Mississippi and Greater Boston in the Tufts Pre-College Enrichment Program, which served minority and economically less-advantaged high school students, in front of North Hall, Summer 1965. 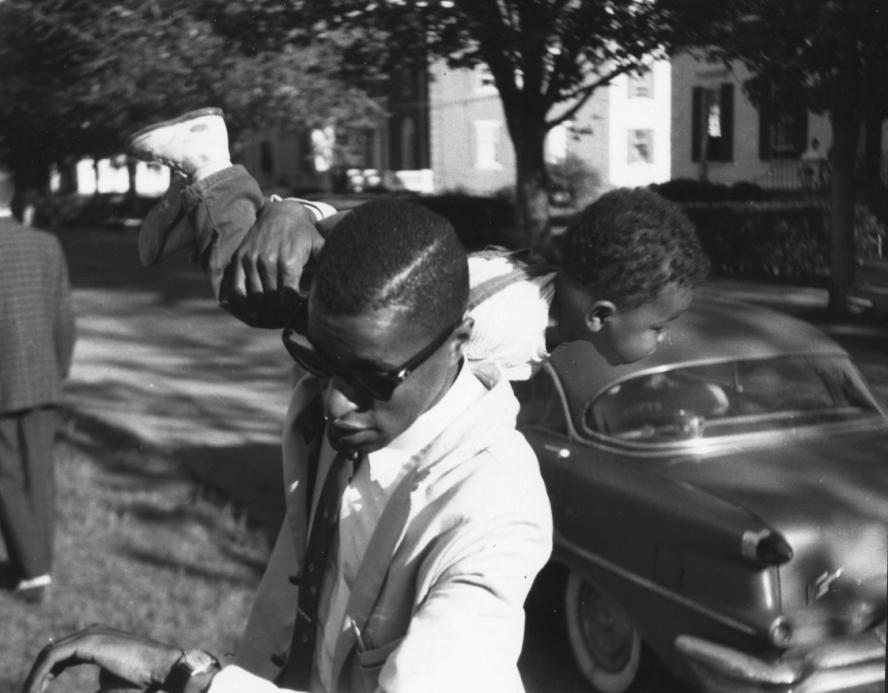 Dean Harleston carrying his son, Jeff, over his shoulder while looking at his watch, circa 1966.